While the state of New York remains undecided on how to actually handle Bitcoin – as a currency that is – The Bitcoin community keeps growing on a weekly basis. Especially in the city of New York itself, as a new Lamassu Bitcoin ATM was installed at the Old Man Hustle bar, located in Lower Manhattan.

Manhattan is proving to be a very interesting spot to have Bitcoin ATM’s installed, as several of these machines can be found throughout the area. According to CoinATMRadar, no less than six Bitcoin ATM’s can be found across Upper and Lower Manhattan.There also seems to be a nice competition going on between Bitcoin ATm manufacturers Lamassu and SkyHook.

Perhaps the most interesting place in all of manhattan to find a Bitcoin ATM is Crispin’s Restaurant in Hell’s Kitchen. Not just because it has its very own Bitcoin ATM, but actually because there are two different Bitcoin ATM’s located at this place. And to make it even more interesting, there is one Lamassu machine and one SkyHook machine, both of which can be accessed seven days a week between 12PM and 2AM

Most of you Bitcoin enthusiasts will be aware that SkyHook is a “cheaper” option when you are looking to purchase your very own Bitcoin ATM. On the other hand, the Lamassu Bitcoin ATM is more expensive, which doesn’t necessarily provide a better user experience. Both machines at Crispin’s are one-way ATM’s, meaning that customers can buy Bitcoin with fiat currency without any problems. CoinATMRadar has no information on the fees associated with either device however.

Over at Trattoria Inwood, which is located at 4994 Broadway, we find another SkyHook Bitcoin ATM. This device can also be accessed seven days a week, so make sure to check the opening hours here. However, this SkyHook ATM may have one of the highest fees I have seen so far, as it charges a whopping 8% commission to exchange your fiat currency to Bitcoin.

But there is a new competitor on the block as Zen Palate – located on 3rd Avenue – hosts a Bitcoin ATM produced by General Bytes. This machine lets you buy Bitcoin in exchange for fiat currency at an unknown fee, and can be access Monday through Sunday. More details about this device can be found here. 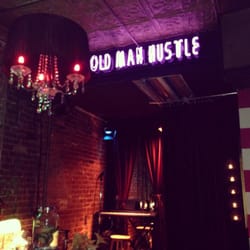 The latest addition to the list of places in Manhattan where you can find a Bitcoin ATM, is called the Old Man Hustle bar in Lower Manhattan. As is the trend of this article, the Lamassu Bitcoin ATM installed at this location is at your disposal seven days a week, and is yet another one-way machine. At this time, we have not received any official indication as to which fees are charged per transaction.

What we do know is that this Lamassu Bitcoin ATM is operated by PYC, a company dedicated to bringing Bitcoin to the state of New York and beyond. According to one of their Twitter posts, the company operates Bitcoin ATM’s in Manhattan, Albany, Burlington and Manchester. It will be interesting to see whether or not PYC decides to turn one or several of their Bitcoin ATM’s into two-way devices in the future.