Bitcoin and fitness, two very different industries with the same purpose. Both are directly related to reward, with one rewarding physically and the other rewarding financially, FitCoin has stepped into the spotlight, pairing the two industries together in a new and unique project.

Bitcoin has become the currency of choice for FitCoin developers as fitness meets physical performance in a experiment attempted never before. FitCoin allows the customer to exercise whilst being rewarded for their physical exertion in Bitcoin. The unique coin works on a Proof Of Human Work algorithm which essentially allows user to earn while they burn (calories). The FitCoin App allows users to monitor the intensity of their exercises with payments being made depending on the intensity of them.

“It’s a really interesting platform play application and service layer,” Ali Madad, the Chaotic Moon Studios creative director said during a demonstration. “[It’s] accessible. It’s not about cypherpunks or overthrowing the government. It’s something that you would use every day.” 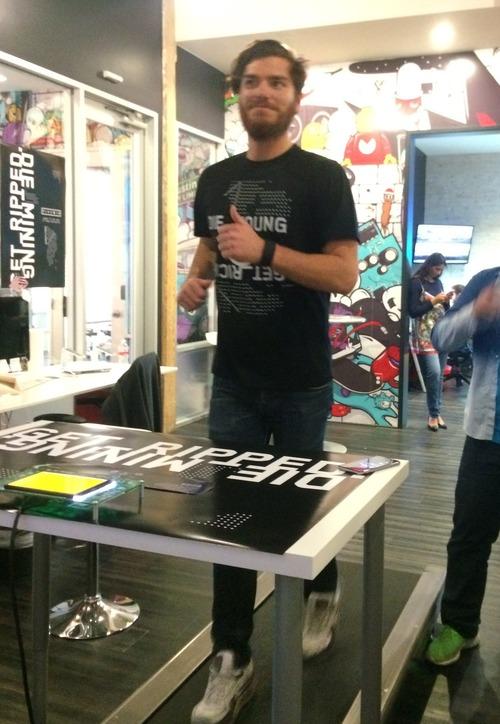 The FitCoin App As tested by Grant Nicol

FitCoin has a big vision as it aims to incorporate its systems in Adidas and various other brands currently associated with health and personal well being. Whilst the app is currently easy to install and use, the developers of FitCoin hope to increase the user base of the App ultimately increasing the popularity of Bitcoin. Emphasizing the benefits provided by the digital cryptocurrency, the company hope to encourage the use of digital currencies such as Bitcoin, as the currency of choice for those looking for a rewarding workout.

With FitCoin set to climb to the top of the industry joining the likes of Adidas, Bitcoin is set to take another dip into uncharted waters. Bitcoins integration into the fitness market will be sure to set markets on fire, with FitCoin being the only experiment of its kind to develop the technology needed for Bitcoin integration. Whilst the project may yet be in a testing phase, the developers hope to iron out bugs and problems rapidly allowing for progress to be made with companies such as Adidas. A joint venture with Adidas is sure to take the markets by storm with rivals such as Nike set to be left out in the cold. As Bitcoin develops so does the userbase, and delving in to the murky depths of fitness and personal health will be another major leap for Bitcoin.