A multiplayer online game is the best mapping of reality, making it the best experimental place: Players control their virtual characters to perform various actions and activities, simulating the real world at a very low cost. Playing games is a very efficient way of learning; some games can even guide social development.

The utopian experiment of Plato Farm

Players generally start Plato Farm with agriculture business. They can grow crops or raise livestock, turning their barren land into a prosperous city. The different choices of different players form the divisions of labor in society. They need to cooperate and trade with each other and develop the civilization and productivity of society step by step.

This is the “Utopia” described by Plato. The fundamental economic activities gradually connect and become the basis of political unity. This process is reproduced in Plato Farm. For example, if players want to produce milk, they need to buy cattle farms, cattle feed, etc. Therefore, they may establish a long-term relationship with players who make those items and form a supply chain; More advanced food requires a lot of milk, so players who produce milk can ally to maximize their benefits.

All such actions are driven spontaneously by the player’s interests. In Plato Farm, smart contracts write all production materials into the blockchain. That is, Plato Farm is an entirely decentralized market economy. This kind of gaming relationship driven by economic interests is essential for our daily life. It is what you can learn in Plato Farm. This is what makes the game fun!

In Plato Farm, players can walk through the development history of human society. It is a blockchain-based NFT game. The props in the game are liquid NFTs that can be traded. An important mechanism is that NPCs can recycle such NFTs, and the GDP of the game determines the recycled quantity and NFT price. Such a mechanism is mapping the development of productivity and the upgrade of equipment in reality, and it also reflects the development law that the working people determine social progress.

To guarantee an income for the player, Plato Farm also has a bond-based mechanism with a token deposit mechanism. With their judgment, players can choose to conduct hedge trade in Plato Farm: Sell their NFTs or the game token Mark to the smart contract, and redeem them when a higher profit opportunity arises.

The game assets in other Gamefi projects can only be used for spot transactions. Therefore, players of those games can only follow the game’s life cycle and watch their returns get smaller and smaller.

The bond-based mechanism is similar to the futures and options in the real world. It also conforms to reality and historical development. After all, futures and options were first adopted in agriculture. The supply and demand relation determines the price. The natural environment dramatically affects the harvest of agricultural products, such as weather. To ensure their benefits, farmers and merchants create future transactions to prescribe the price of the coming year.

The technological innovation of Plato Farm

Now, let’s take a look at the technological innovations of Plato Farm: 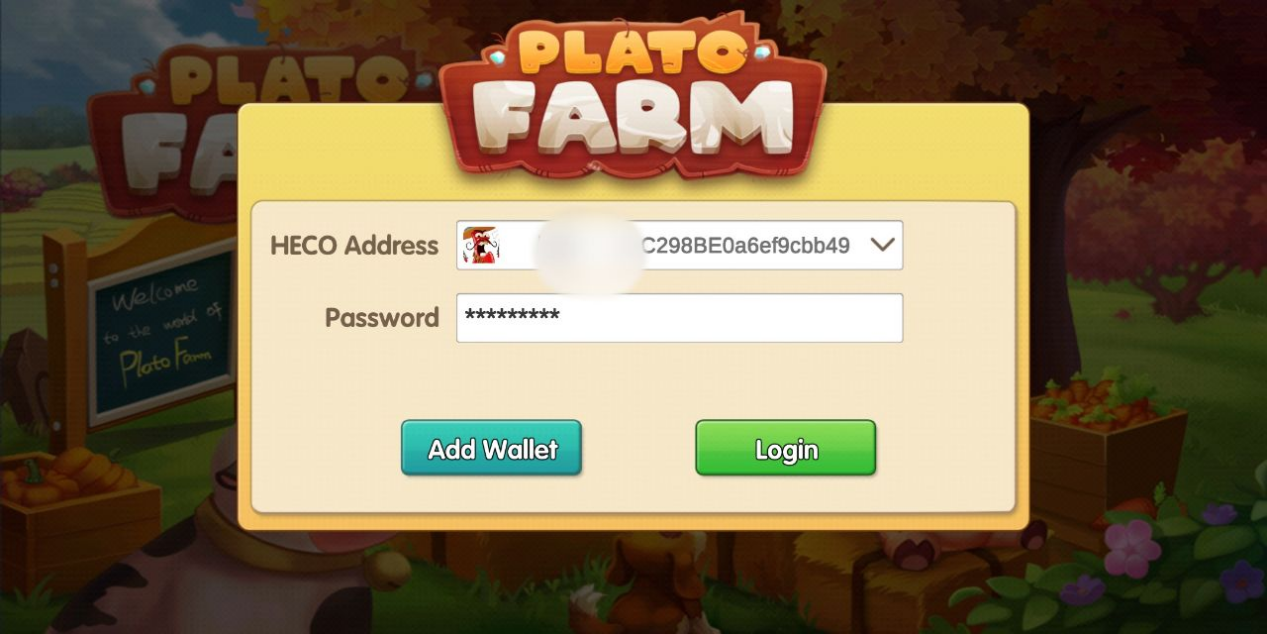 Most blockchain games are in the form of DApp. Plato Farm, on the other hand, adopts the APP form. Combined with the professional game engine Unity, it provides an excellent game screen quality and gaming experience.

Plato Farm uses the ERC1155 protocol to mint various prop NFTs in the game, significantly improving efficiency and reducing time and gas fee costs. The ownership of NFTs belongs to the player and is stored in the player’s wallet. At the same time, players can freely trade their NFTs. 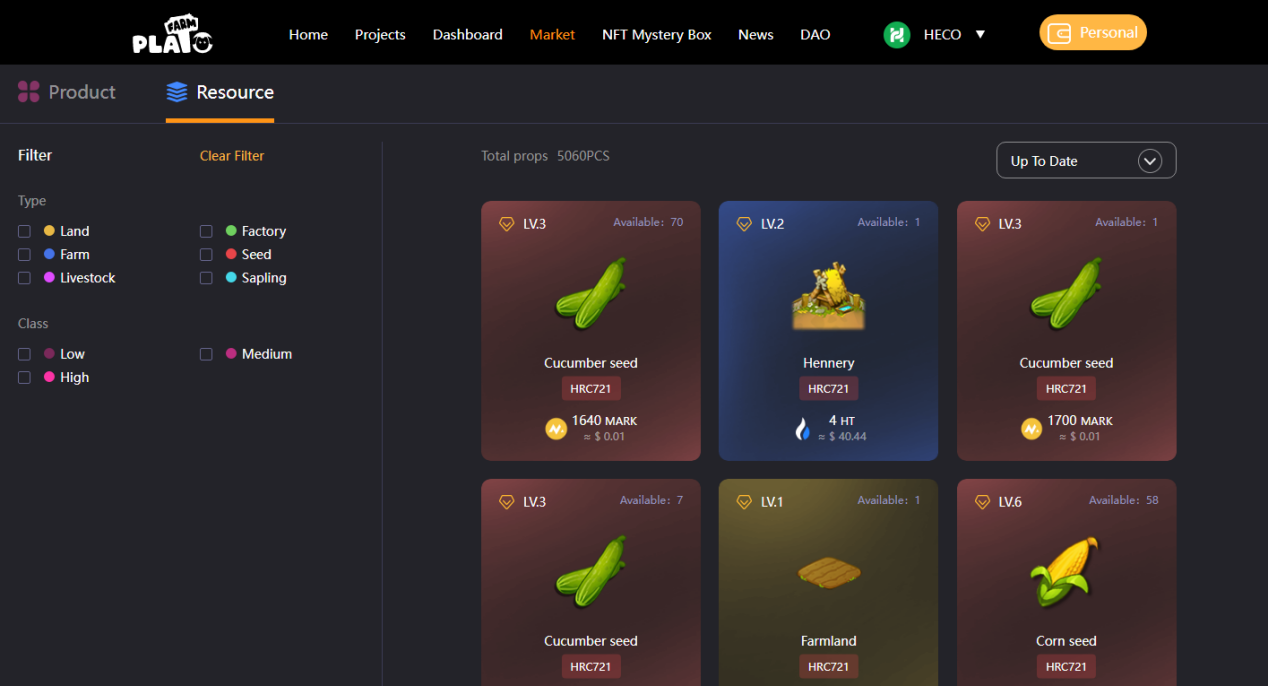 The most famous blockchain game, Axie, is registered by email, and its players need to register the Ronin wallet and then bind the email through the Ronin wallet. The whole process is quite complicated.

On the other hand, Plato Farm has a decentralized wallet function, and players can directly use the wallet to log in without manual binding. Players can play the game by logging in to the wallet, which is much simpler. If players don’t have a wallet, they can create a wallet in the game.

4.1. The purchase process of Axie

It is pretty troublesome for novices to buy pets in Axie. The general process is:

4.2. The purchase process of Plato Farm 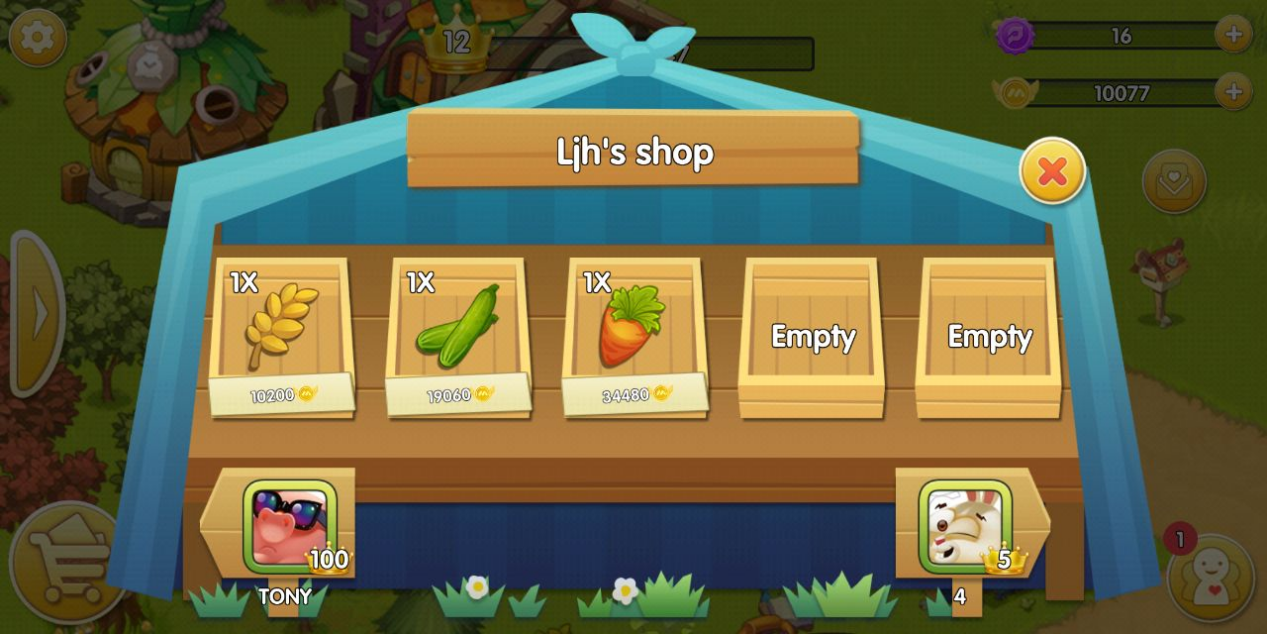 Users only need HT and USDT to purchase NFTs from Plato Farm. There are two purchase methods:

Method 1 is suitable for purchasing all NFT props:

Buy HT and USDT on the exchange. HT is mainly used to buy props and pay for miners. USDT is primarily used to purchase props, purchase MARK and PLATO tokens.

Players can buy MARK tokens with USDT in the game and purchase NFTs with those MARK tokens.

Method 2 is more suitable for purchasing NFTs except for raw materials:

Players can use MARK to purchase NFTs except for raw materials directly in the game. 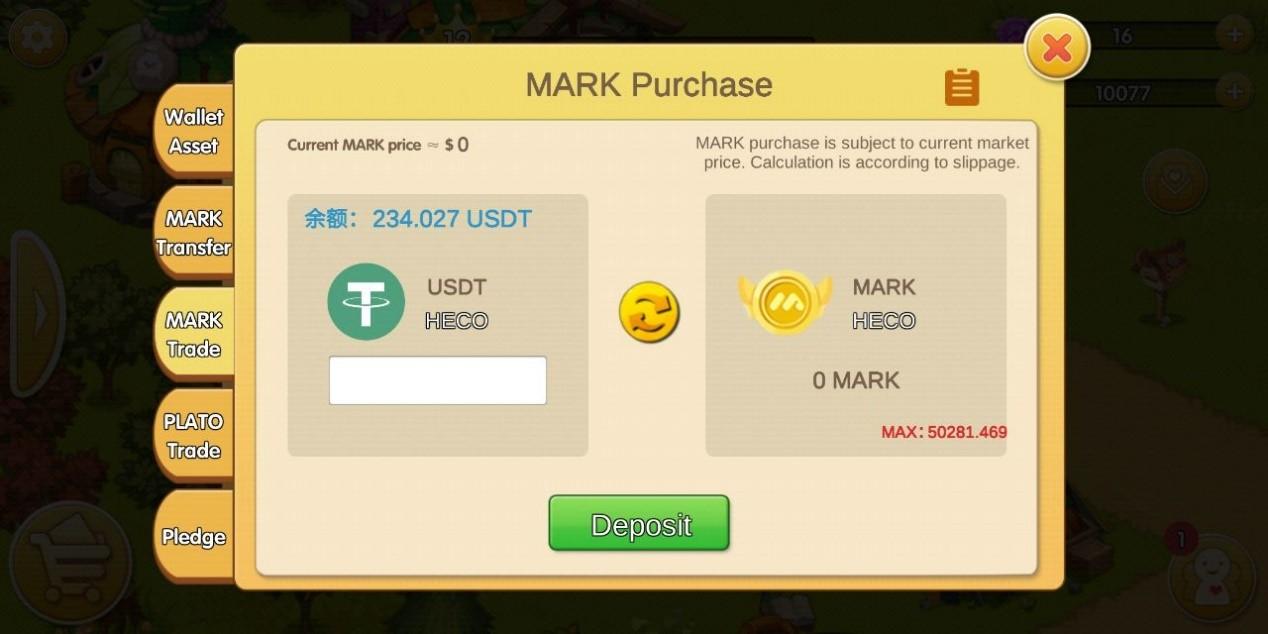 Favored by the capital market, Plato Farm will likely stir up another metaverse boom. It revolutionizes the current farm games and truly realizes the fun and economy of farm management.

Disclosure: This is a sponsored press release. Please do your research before buying any cryptocurrency.