Russia, one of Bitcoins main backers coming among the ranks of China for Bitcoin usage, has seen the rapid fall of official currency the Russian Ruble. The Russian Ruble known for its stability and preferred by Russian investors has lost its position as one of the best investments of 2014 as Bitcoin usurps its place. As seen on BTC-E, the trade volume for BTC-RUB has dramatically increased signalling many Russians to let their Ruble balance be dumped in favor of the cryptocurrency,

“The news coming out of Russia is indeed unparalleled,” Bobby Lee, the co-founder and CEO of prominent Chinese bitcoin exchange BTC China. 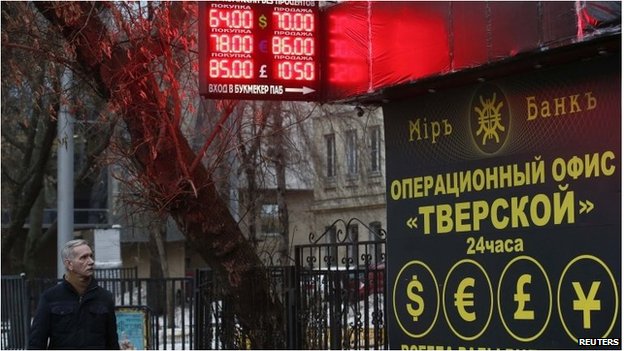 Today marks one of the lowest levels seen for the Russian Ruble since the early 1998.Compared to the GreenBack the Russian Ruble tumbled and fell 11%  a record low. The trading between the 2 volatile currencies continued with increase seen in volume as investors dived head first into the depths of crypto. The frenzy has triggered speculation surrounding Russia economic state as many perceive the trade sanctions imposed by the west to have severe economic impacts to the economy. The devaluation of the Ruble has launched volatility increasing which is extremely unusual for a currency to demonstrate during this stage of its maturity.

The amount of wealth encased in the Russian economy is unbelievable as the country is home to one of the highest number of millionaires. With new cash being pumped into the Bitcoin economy one would expect some sort of rise. Surely pumping hundreds of thousands of Dollars into the economy might having given the price of Bitcoin a playful nudge in the right direction. In this case it gave the price a push in the wrong direction as the price of Bitcoin fell with $20 + shaved off bringing the price of Bitcoin down to $319, as of writing, and falling.

“I’d be surprised if Russians were turning to bitcoin in any meaningful way given the uncertainty over whether they could use it or store it without penalties in the future,  said Akif Khan Vice President of BitNet.

The tight restrictions placed on the trade and use of Bitcoins in the country has not deterred many Bitcoin traders as the fragile Ruble has seen turbulence lengthen meaning Bitcoin is a much safer investment. Whilst the Russian Finance Ministry attempt to sort the sliding Ruble prices by auctioning of Foreign Reserve Shares in an attempt to pump further liquidity into the currency.


A cryptocurrency exchange based in Bulgaria, called BTC-e, is known in the industry as being the most Russian-

friendly despite bitcoin being made illegal in Russia. The exchange allows users to trade in rubles and its website can be displayed in the Russian language alongside Chinese and English. Data from bitcoinity.org shows that the exchange has seen a modest spike in ruble transactions in recent weeks.

The Russian economy may not be all its cracked up to be but is the huge sell off justified ? Is the Bitcoin a investment viable for all ? Voice all your opinions and comments below and stay tuned for more exclusive inside news in the world of Bitcoin.