In just the past week, the global market cap of all cryptocurrencies has fallen close to US$70 billion. In that same period, Bitcoin (BTC) has fallen 20% from a local high of US$9,000 to its current price of $7,500. Despite a number of bullish sentiments and news recently, the price of Bitcoin and cryptocurrencies across the board continues to fall.

On the same day that Forbes called for a $20,000 Bitcoin, the price fell 5% further. Bitcoin currently sits at just above US$7,500, directly following a low of $7,410. With every passing dip, speculators and hopefuls call the bottom. While each call has failed, it’s necessary to recognize that, at some point, the bottom call will be right.

New and exciting developments every day reinforce the intrinsic value of Bitcoin and cryptocurrencies as a whole. Lightning Network is now fully functional, allowing anyone to send BTC micropayments instantaneously at negligible costs, even expanding beyond the capacities of industry leading exchange currencies, such as NANO. Yesterday, 6 “LApps”, or Lightning Apps, were also introduced for integration onto LN. 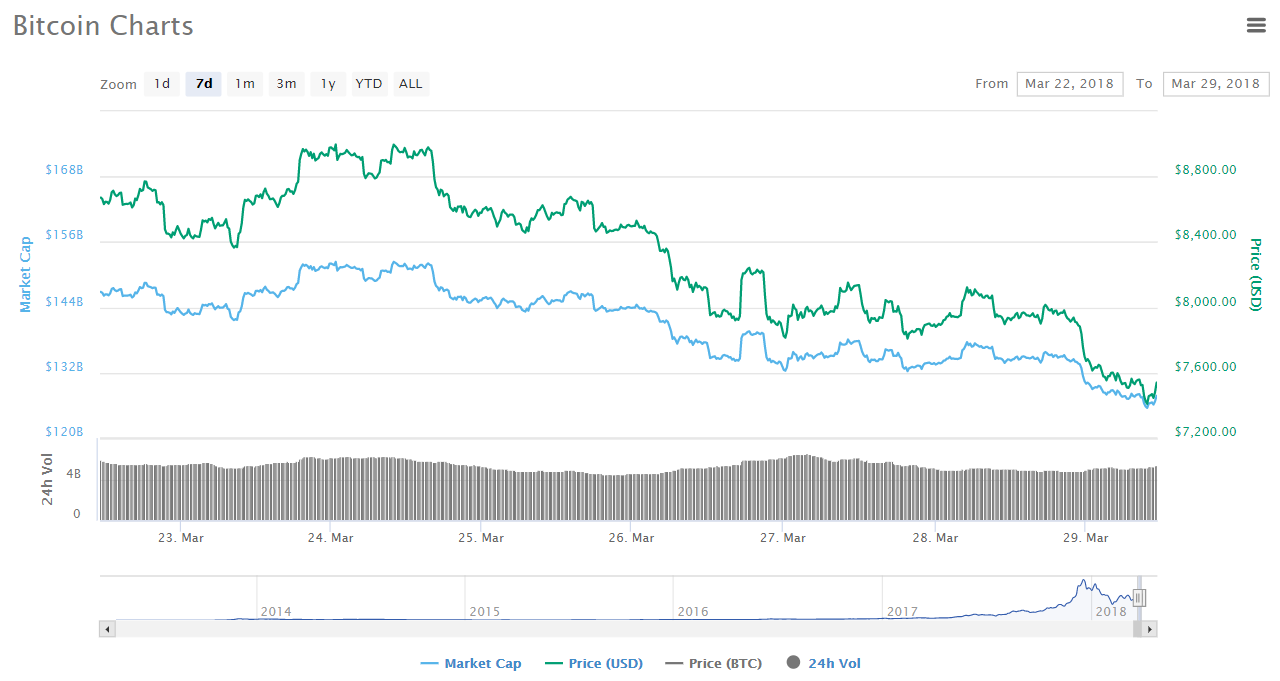 While global developments certainly suggest that a redirection in price movement is long overdue, some speculators suggest that it is possible the bear trend has only just begun. Drawing inspiration from the extended Bitcoin downtrend of 2011-2013, as well as that of 2014-2016, some fear that we might not see an extended, sustained sea of green until 2019 or even 2020.

Although Bitcoin is performing very poorly, perhaps more worrisome is that most altcoins are doing even worse. BTC market dominance has grown over 12% from January lows of 33% dominance to today’s rate of close to 46%. Today, three quarters of the top 100 market cap coins have lost BTC value- seeing a drop in dollar value even greater than what was seen by BTC’s 5% dip.

One explanation of this trend points to the nature of altcoin markets. When individuals purchase altcoins, in most cases, they must first purchase BTC. For example, if I want to purchase ICON with fiat, I would buy Bitcoin to buy ICON. In this instance, every dollar I spend on ICON actually places two dollars of buy pressure on the global market, as I make two purchases with the same money. For ICO purchases on different blockchains, this process could further extend. If I were to buy an ICO token on the NEO platform, the purchase would follow: USD to BTC to NEO to ICO token, effectively a triple buy pressure.

The contrast is also true. When individuals want to exit cryptocurrency markets, they likely have to dump their altcoins for BTC to dump BTC for cash. Every one dollar sold generates two or three dollars of sell pressure. This would explain the extreme volatility through both the recent upwards and downwards trends.

Hopefully, the today’s calls for a bottom will be the ones that reign true. Regardless, of short term price movements, however, the technology is here to stay.