The time when investors were telling jokes about Elon Musk’s intentions to buy a huge amount of BTC is over because Tesla did buy Bitcoins worth $1.5 billion. The cryptocurrency market immediately responded to this news with an outstanding bullish rally and the leading digital asset updated its all-time high by testing $48,000 amid aggressive purchases from retail investors. As far back as January 2021, Tesla announced its investment policy, according to which it was planning to buy the cryptocurrency. Moreover, the company is getting ready to accept BTC as payments for its products in the nearest future. However, this news was no surprise for anybody, rather the opposite, because Musk’s decision corresponded with the heightened interest in cryptocurrencies on behalf of large companies and investment funds.

A bit later, there was information from experts that Apple should engage in cryptocurrencies because it has huge growth potential in this sphere, huger than any other company in the world. Earlier, the Apple Pay vice president said that the company was closely watching the cryptocurrency market – it was really interesting and has long-term potential. Since Apple is already thinking of buying BTC, then other companies may follow in the footsteps of Tesla. Experts calculated immediately that if American companies invest 1% of their assets in Bitcoin, its price may skyrocket to $70,000 per coin. However, if they invest up to 10%, the BTC rate may break $400,000 per Bitcoin.

Taking into account the fact that the BTC supply on the market is reducing, such behavior of the above-mentioned companies may really result in an awesome growth of the cryptocurrency market. At the same time, high-profile cryptocurrency holders will continue amassing and storing digital assets, thus decreasing the number of coins available to others. 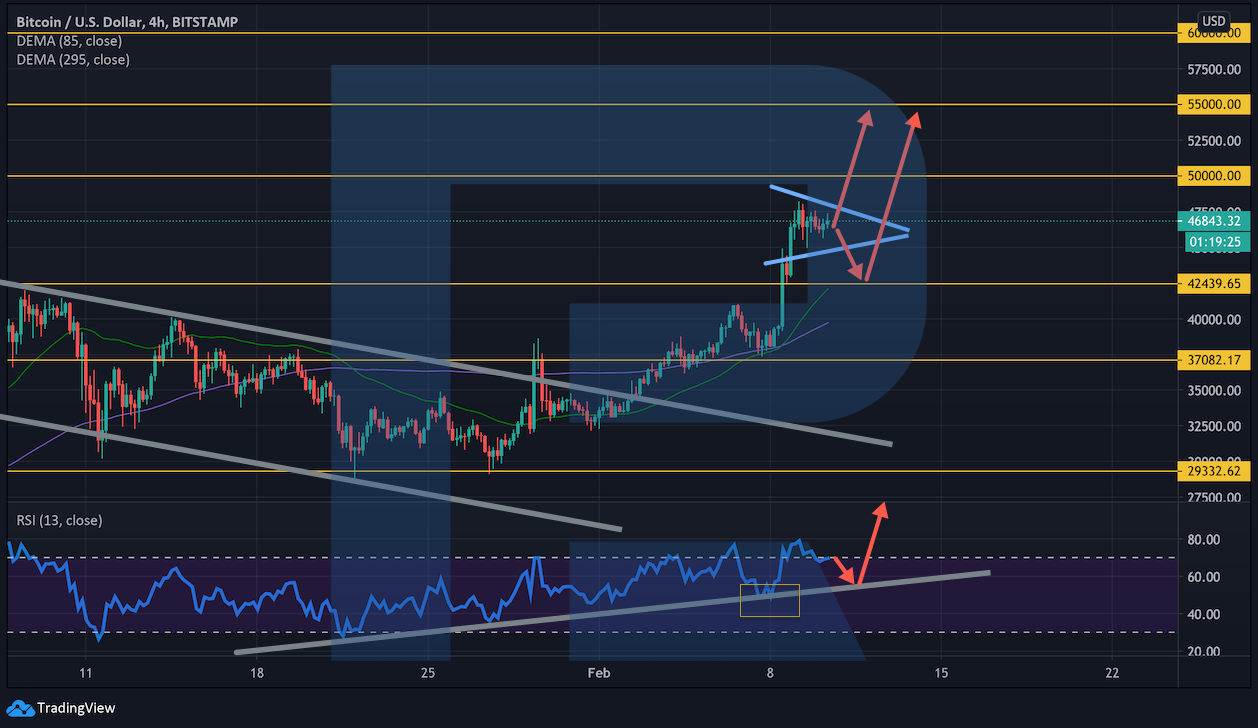 As we can see in the H4 chart, the asset is forming a “Pennant” pattern with a small Triangle on its top. If the price breaks the pattern’s upside border, the pair may grow quickly with the target at $55,000. On the other hand, a breakout of the pattern’s downside border may lead to a further correction towards $42,000. After reaching this level, the instrument may resume moving upwards.