Skeptics and supporters alike are scratching their heads over the massive run Einsteinium (EMC2) has had over the past month, rising from less than $.06 to over $.80 USD. It is currently fluctuating between #49 and #51 on CoinMarketCap, having jumped over 200 spots throughout these last few hectic weeks.

Einsteinium has been around since 2014, and since its inception has served the same purpose: funding scientific projects voted on by its holders. 2% of every block is donated to these projects. Throughout the past three years, there has not been much progress made beyond that. In fact, there have been no changes to the code in the past month. Overall, there were just six commits made in the past year. 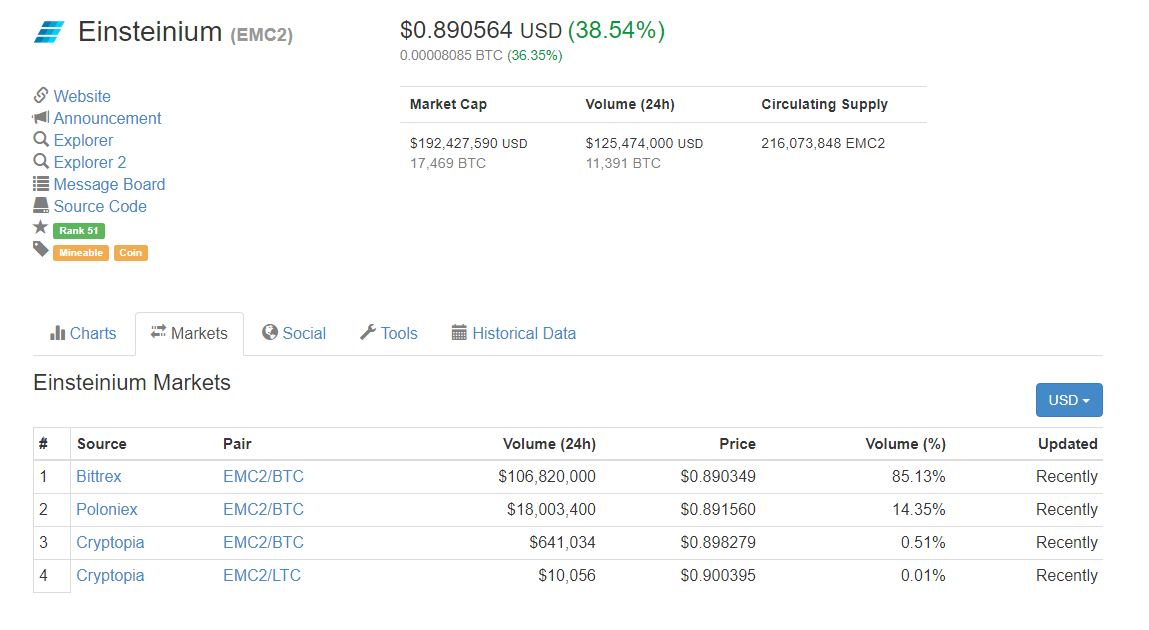 As far as what is happening with this coin, a hard fork is taking place next week. Through the fork, close to 50 million coins will be burned, reducing the supply by around 25%. In addition, mining rewards will be reduced significantly. While this explains some of the recent price appreciation, a 25% decrease in supply does not justify a more than 10x increase in price. The only other “news” to speak of is a big announcement coming up, though there’s no indication as to what this announcement might include.

What may be even more troubling than the lack of substance behind this project is what this hard fork will mean. As mentioned earlier, a flat percentage of mining rewards are donated to scientific projects. By lowering block rewards, the amount donated will effectively be slashed as well. This seems highly counterintuitive to the perceived goal of this project.

The major question Einsteinium fails to answer is what holding the coin actually does. Yes, you get a vote in where the scientific donations go. Beyond that? Nothing. This begs the question: if you are looking to support donations to science, why would you purchase this cryptocurrency rather than make donations yourself and have 100% control over where they go?

Einsteinium’s Telegram and Reddit communities (which are both comparatively small for a top 50 coin and one that’s existed for over three years, at under 2,000 members each) seem to be struggling to determine what Einsteinium’s value proposition is. When the question was posed in Telegram, one user, Ahmat, attempted an answer. “By holding you help the price grow, this means more funding for science.” He is right that a higher-priced EMC2 means larger donations. As stated previously, however, the upcoming hard fork seems to directly oppose the philosophy of raising money to fund science.

Realistically, the first part of Ahmat’s statement is what rings true to current supporters. By holding the coin, its price goes up. Of course, this pumping ideology only rings true so long as people continue to buy in, and current investors choose not to take their profits and sell their coins. The current rally is destined to collapse at some point, likely sooner rather than later.