The Dark web has housed criminals a plenty. Providing annonimity and safety to drug dealers, fraudsters and even arms dealers, the dark web has thrived side by side with Bitcoin.  However the US governments clampdown on dark web businesses came out in force with the Silk Road being one of the main targets. Raising hundreds of thousands dollars on a daily basis the drug marketplace had become popular and associated with a whole variety of illegal business.

The fall of Ulbricht

The moment Silk Road fell from its pedestal, the US government saw Ross Ulbricht as one of the main operators of the drug dealing marketplace. The trial has been the subject of much controversy as initially charges of narcotics distribution, computer hacking and money laundering were put forward against the Silk Road operator. Charges of murder may also be put on to the already lenghty rapsheet as accusations of murder are hovering in the air. The Silk Road was also suspected to be a vendor of illicit deals between hitmen and their customers.

The accusations of murder-for-hire in Ulbricht’s case have become a controversial albatross around the 30-year-old defendant’s neck: despite describing how Ulbricht allegedly attempted to pay for the murders of six people in pre-trial documents, prosecutors haven’t actually charged Ulbricht with those murders.

Read more from the statement here

Murder charges are part of a smear campaign claims Ulbricht

The defense team for the Silk Road operator argued that the refusal to reveal the names of witness had unnecessarily made their case much harder to pull together. With out access to email or any communication to the outside from jail the defense team argued that Ulbricht had “extremely limited access to the outside world.” They also reported that the murder charges that were sought to be brought by the prosecuters may have been part of a smear campaign to diminish the reputation Ulbricht had maintained among his countless followers. Many believed that Ulbricht had only supported and permitted business that was victim-less, but since the murder charges were rumored, the respect many had for Ulbricht vanished. 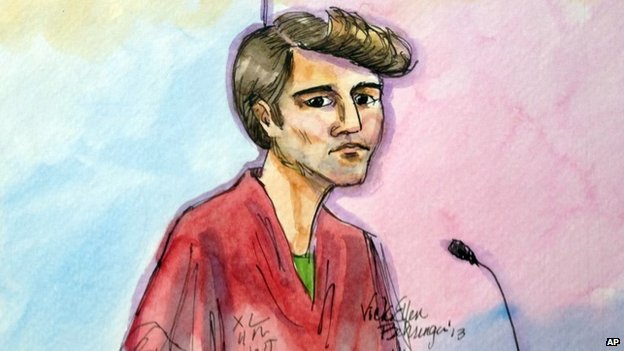 However the Judge failed to sympathies with Ulbricht as the defense teams plea was not granted. Forrest claimed that Ulbrich still has the power to order the killings of the witnesses. Judge Forrest cited how Ulbricht had previously attempted an assassination of Curtis Clark Green, via a hitman who he had paid $80 000. The plan was foiled as the “hitman” was revealed to be a Undercover DEA agent. A FBI account was also highlighted which claimed the former operator had ordered and paid for the murder of 6 people with one being a employee of the site who Ulbricht had suspected would defect and reveal his identity to the police.

Forrest wrote in her response that despite his imprisonment, Ulbricht might nonetheless reach contacts who could threaten witnesses. “While defendant has limited access to the outside world, that has been true of many defendants in many cases who have creatively managed around such limitations,”

Was Judge Forrest justified for her actions or is this all part of a massive smear campaign inteded to smear the reputation of the once ‘king of the darkweb’ Ulbricht. Voice your opinions below.