After Shiba Inu’s meteoric rise last year, meme coins continue to show significant price gains. It’s clear that both Metaverse and Meme coins are the most popular niches for newly released cryptocurrencies and generate an insane amount of hype among traders. Let’s look at a recently released meme coin called Spook Inu that gained over 435% today.

What Is Spook Inu (SINU)?

Launched on February 17th, 2022, Spook Inu is a Shiba Inu-themed Meme coin built on the Binance Smart Chain. Like most meme-coins, Spook Inu is a community-powered coin with a mission to “break the barriers of possibility” by offering generous incentives for holders.

Spook Inu is looking to create a user-friendly platform that enables holders and potential investors of the coin to explore, research and achieve financial freedom.

Some token features include their unique decentralized exchange called Spook Swap, enabling holders to earn liquidity tokens by providing liquidity to the platform. It’s worth noting that Spook Swap isn’t yet available and is currently in development.

When it comes to the tokenomics of Spook Inu, the project features a rebase functionality, meaning that the token’s supply dynamically adjusts via an algorithm to keep the markets healthy. According to the whitepaper, the rebases will be infrequent and executed on a small scale, thereby not causing massive fluctuations.

Moreover, Spook Inu is looking to mint an NFT collection and marketplace, providing further utility to the token. Last but not least, Spook Inu will also feature their unique wallet, making it easy for traders to store and swap their SINU tokens.

Why Is SINU Price Rising?

According to their Twitter, Spook Inu is the number one trending coin on Crypto.com. However, we couldn’t verify that information, and Spook Inu isn’t listed on the exchange. It’s unclear why Spook Inu would claim such an easily falsifiable statement.

At this time, SINU is only available on PancakeSwap, a Decentralized Exchange.

Looking at the holders’ distribution on bscscan, some very concerning numbers show that two addresses hold over 550% of the token’s supply. 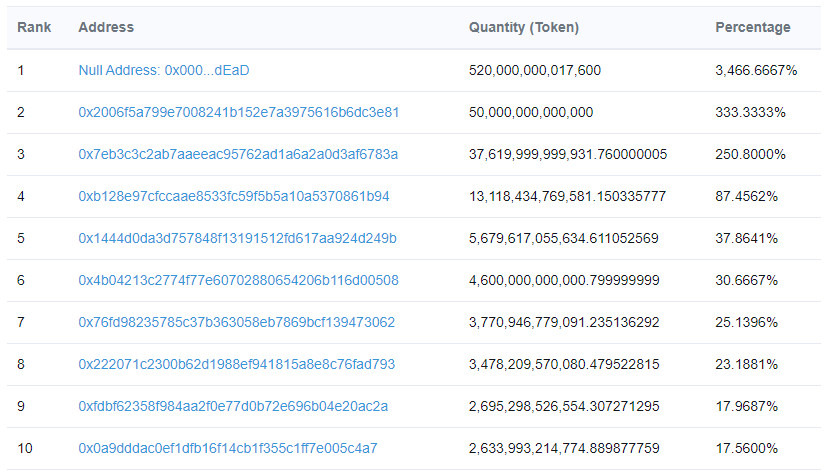 That’s right, 550% of the token’s supply. The whacky numbers are due to Spook Inu’s rebase algorithm, which continuously adjusts the supply.

The two red flags, including the false statement on Twitter and the ridiculous holders’ distribution numbers, should make investors wary of buying this token. We also saw reports on Twitter of users complaining that half of their tokens disappeared from their wallets.

The most likely reason for that is the rebase algorithm which can dynamically adjust the supply and adjust the number of tokens in each person’s wallets.

We recommend proceeding with caution regarding this token due to the above information. Moreover, this token doesn’t feature a Minimum Viable Product is another reason for concern.