Pinball is considered an arcade game in which a player uses paddles or flippers to get one or more balls inside a pinball machine. Pinball machines are basically cabinets covered in glass, and they are full of lights, targets, bumpers, ramps and some other objects, depending on the design. The objective when you play a pinball game is to get as many points as possible. You can do that by hitting targets and making different shots using the flippers before you run out of balls. The pinball game will end when there are no more balls left. Online casino games are similar; colourful lights, a wide variety of games and potential to win amazing bonuses with book of dead spins.

Creation of the First Pinball Machine

The beginnings of pinball machines operated by coins were created in Ohio and Chicago, and players used them for fun and gambling. Different types of pinball games can be found way back in the 17th century, way before the pinball machine as we know it was invented. So, the pinball industry is older than we might think. In 1933 the first pinball machine using electricity was created by Harry Williams. He designed a new type of game called “Rocket”, in which electricity was used to power a mechanism that would give players coins. During these years, around 150 companies were creating the early pinball machines, and competition was intense, as many people saw pinball as an excellent way to pass their free time.

The Prohibition of Pinball Machines in New York City

America went through a period where all pinball machines were prohibited, also known as the “pinball ban”. New York City, Los Angeles, and Chicago were among the states where pinball operators could not run any pinball machine. The flipper wasn’t invented by pinball manufacturers until 1947, as the first type of pinball machine was the coin-operated machine. As a result, authorities believed pinball was not a game of skill, and lawmakers connected the pinball division with mafia activities. Police were encouraged to destroy any pinball machines they found. This prohibition ended in 1976 when the Amusement and Music Operators Association managed to convince the authorities that pinball is a game of skill, not mechanized gambling. 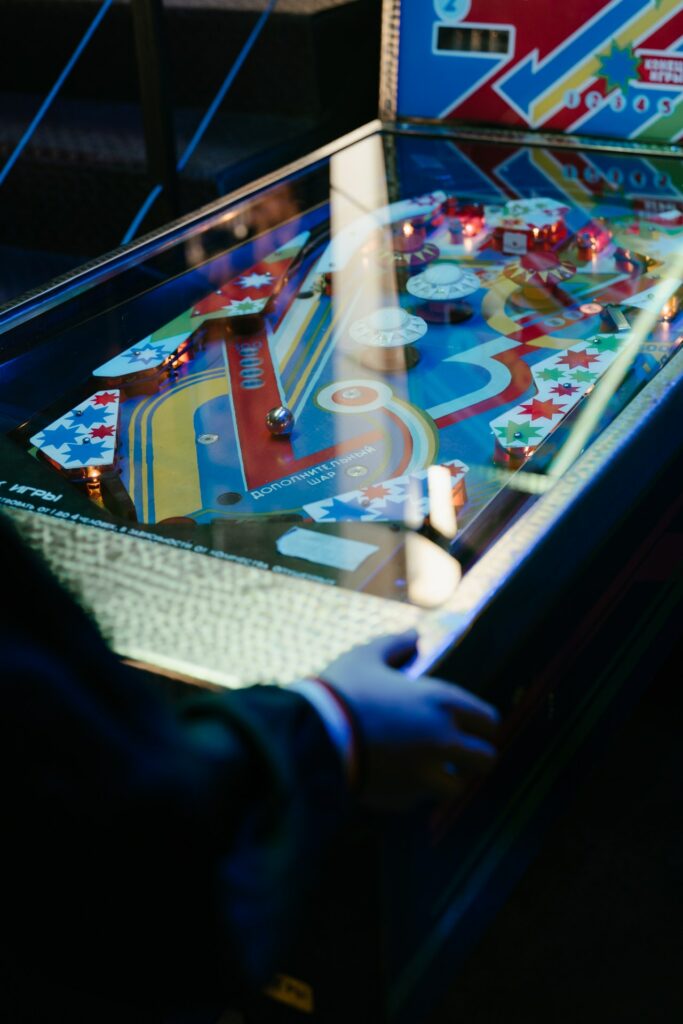 During the 1980s, manufacturers started using the technology to create modern pinball machines, which used more computer science, following the example of video games. They had soundtracks and light shows, which was a radical change compared to the electromechanical pinball machines previously created. At the end of the century, there were some problems with the creation and the popularity of machines and games, so video games, which became more realistic, started to gain friction and drew players’ attention. As the large corporations like Stern Pinball stopped working, in the 2000s, smaller, more independent companies started making pinball machines, and people fell in love with playing pinball once again. That period is known as the “Revival”.

Pinball machines, just like other games, were used as gambling devices very often, and some of them, such as the “Bingos” by Bally, had a grid on the scoring area with spaces that were targets or holes on the playfield. Players had the chance to win free games if they succeeded in getting the balls in a winning pattern, but this was entirely random, so many often used these machines for gambling.

Many operators allowed players to win and get significant numbers of these games, which they could later exchange or cash out for money with the location’s owner. These pin games became extremely popular, but they were later discounted to legitimize the machines and avoid legal problems. Some games, however, managed to adapt to the situation and offered players extra balls to play instead. These supplementary balls were marked with graphics on the glass or by a ball count wheel.

As mentioned above, the problems with modern games arrived when the flipper was introduced in the place of coin-operated games. Lawmakers started seeing a connection between pinball and the mafia, and they thought that the mafia was using it as a way to launder money and conduct its criminal activities. As a result, pinball was banned for almost 30 years in many major cities in the US, including New York, Los Angeles and Chicago. An extended period of convincing the authorities that these games were not games of chance; instead, they require a specific skill. It finally came into fruition in 1976, when the AMOA decided that pin games were not games of chance and were once again legalized.

A close relative of pinball that deserves mention is the pachinko, a gambling game played in Japan and a highly popular one in the country. Both of the games share some common ancestry, and they are seen as relatives. Still, they are different in many ways, as pachinko involves shooting small balls into a vertical playfield or board. Pinball is more about the so-called “manipulation” of the smaller number of balls in the pinball playfield.

All in all, we can conclude that pinball and the games associated with it had a long and turbulent history, especially when the machines were connected to gambling, and there were massive problems with the lawmakers in the US. So who knows, we might be in for another twist when it comes to these games and machines.

I'm an entrepreneur, who happens to dabble in crypto and finance