Cryptocurrency markets continue to trade sideways this week after last weekend’s correction. While support for major digital assets like BTC and ETH holds, the global crypto market remains below the $1 trillion range, suggesting that the bears are still in control.

August has been a weak month for BTC and ETH markets, as Bitcoin failed to hold support at the $24k range and Ethereum prices stalled after peaking at $1,900.

Bitcoin continues to struggle with bearish momentum, and a Yahoo Finance report today claims that BTCUSD is “just barely hanging on” ahead of a historically weak September.

The good news is that Bitcoin could hit its bottom in September, especially if the global economy rebounds. At the same time, recovery in September could be unlikely since Jerome Powell’s latest speech at Jackson Hall last week suggested that the Fed will continue to raise interest rates in an attempt to curb inflation and restart the economy.

When it comes to Ethereum prices, while the upcoming merge in September will provide some bullish support for ETHUSD, the second-largest crypto asset still follows Bitcoin’s market movements. As such, it will be rather difficult for Ethereum to exhibit significant bullish momentum without Bitcoin’s support.

Speaking of markets that are related to each other, Bitcoin continues to follow traditional stock markets’ price action. Looking at the performance of stock markets this week, it’s quite bearish, with the S&P 500 down 4% in the past five days, NASDAQ is down 3.88%, and the Dow Jones is down 3.85%.

While the situation may seem gloomy, current prices also provide an excellent opportunity to Dollar-cost average your long-term investments for the next bull run. While it may take until December or January to see any substantial gains, current low prices hold support relatively well. The chances that crypto markets show another significant correction are relatively low.

Looking at alternative.me’s Bitcoin fear and greed index; the current level is at 23. The market is in extreme fear, the highest it has been all month. 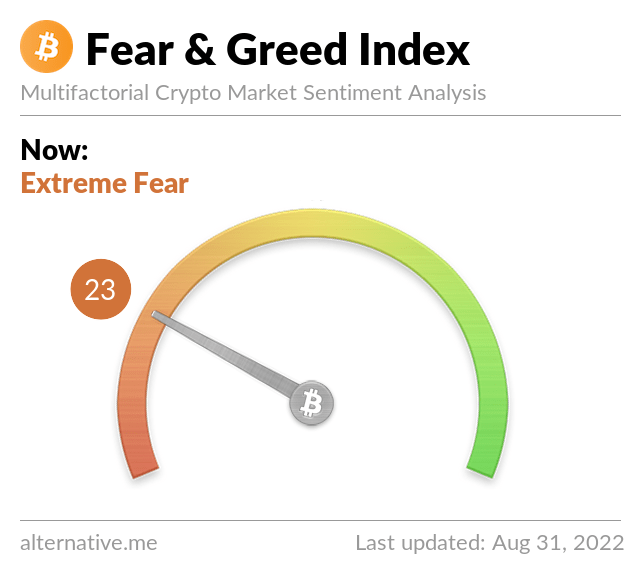 While many traders fear further corrections, the best time to buy is during extreme fear. The last time the market was in such extreme fear was back in July when Bitcoin’s prices dipped from a high of $30k to a low of $19k the month prior.

Disclosure: This is not trading or investment advice. Always do your research before buying any cryptocurrency or investing in any services.

Follow us on Twitter @themerklehash to stay updated with the latest Crypto, NFT, AI, Cybersecurity, and Metaverse news!