We’ve seen Shiba Inu making headlines when it changed the lives of many early investors who are now millionaires. There’s huge community support behind $SHIB which is one of the main reasons for Shiba Inu’s rise to stardom. In this article, we will explore some statistics regarding $SHIB, specifically the distribution of wealth across different holders and exchanges. 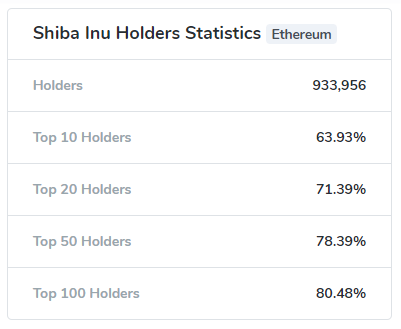 According to the richlist provided by Coincarp, we can see the top 10 richest Shiba Inu addresses. At the time of writing, there are a total of 933,956 $SHIB holders with the top 10 addresses owning more than 60% of Shiba Inu’s supply.

At first sight this might seem like a media headline, however when you take a closer look, the reality is much different. 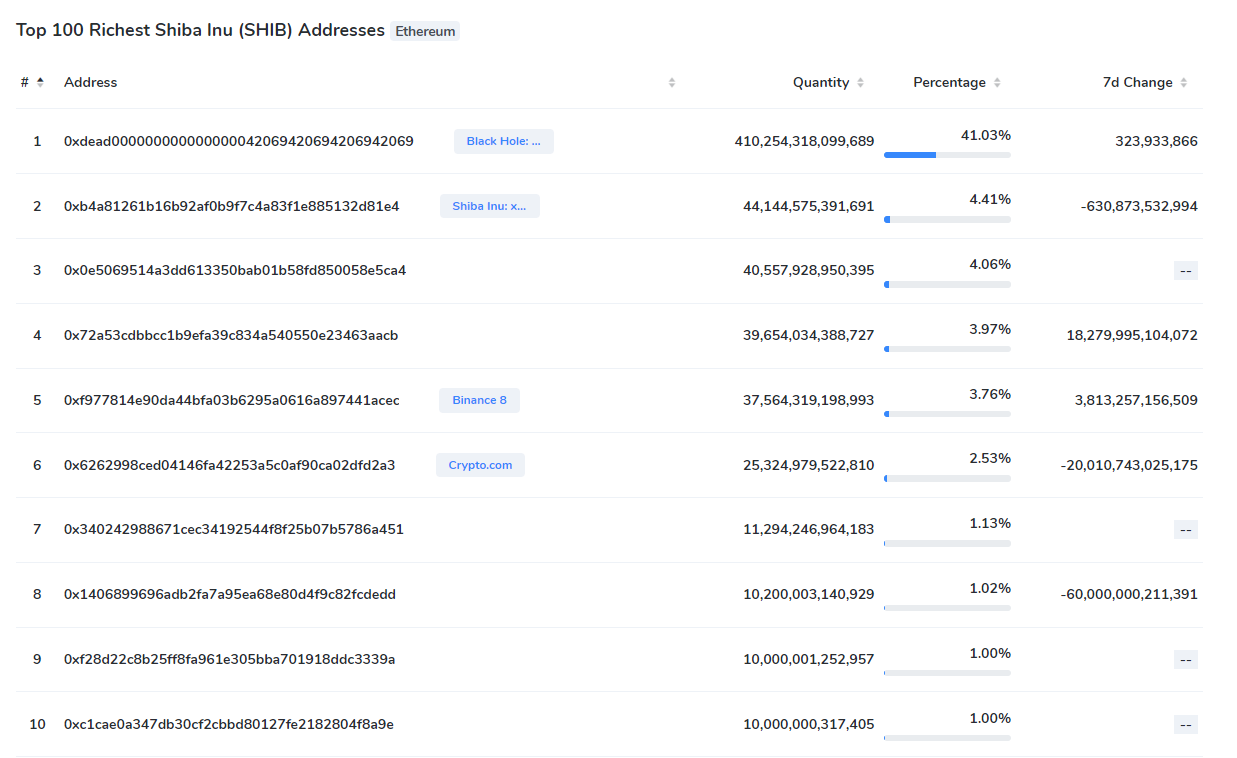 The top holder is a Black Hole address containing over 41% of the total Shiba Inu supply. This was the address Vitalik Buterin sent $SHIB to in order to burn them and reduce the overall supply. He did end up donating over $1b in Shiba tokens to the India Covid Relief fund, but ended up burning the rest.

Moving on to the second largest holder that holds 4.41% of the total Shiba Inu supply. This wallet contains over 2 trillion $SHIB tokens.

This is the staking address for $SHIB that contains all the Shiba Inu coins that were buried using BuryShib. Looking at the actual contract of the address a comment in the code reads:

“BuryShib is the coolest pit in town. You come in with some Shib, and leave with more! The longer you stay, the more Shib you get.”

Looking in the comments, many users are reporting that this is potentially a hacker’s wallet that stole their coins.

Here’s just one example of many such comments:

“Hi would anyone be able to assist me? I unstaked my xshib from shibaswap to my MetaMask wallet. I have then tried to send my xshib to my crypto wallet. My xshib have now been diverted to this address. Is there anyway of retrieving these tokens?”

This is not correct. The above address is simply staking your $SHIB.

Next down on the list we have the Crypto.com and Binance exchange addresses which currently rank as the 5th and 6th largest holder of $SHIB.

Below that we have the infamous $8b whale wallet that has been circulating in the news. Last week it moved 40 trillion $SHIB to 4 different addresses, today that same whale moved 20 trillion more $SHIB to 2 more addresses.

It’s clear that the market does not like to see those coins move, uncertainty as to whether the whale will try to sell the coins on an exchange is a big reason for $SHIB’s current bearish momentum.

The addresses following the whale all contain roughly 1% of the total supply of $SHIB. While at first sight it may look like Shiba Inu has a lot of holders with an unfair amount of coins, the reality is much different.

With almost 1 million addresses holding Shiba Inu, and the largest holder owning roughly 4% of the total supply in my opinion the distribution of wealth when it comes to $SHIB is relatively fair.

$SHIB continues to trade sideways throughout the day, showing strong support at the $0.000054 level.