In the traditional Internet field, the growth of games has always been in a strong position compared to other sectors, especially in the global outbreak of COVID-19 in 2020. After the online economic stimulus, the online gaming sector saw rapid development in 2020. According to Newzoo’s 2021 market summary report, the total revenue of the game market in 2021 topped $180.3 billion, up 1.4% from last year, and the market is optimistic for 2022.

Traditional games adhere to the ideology of the Internet, the Web2.0 world, and they tend to be centralized and commercially driven. Usually, game development companies operating companies have the right to modify the game’s rules arbitrarily. The player’s asset in the game is usually server points. The game companies are rewarded for their players’ money and attention. Often, of course, the underlying needs of traditional gamers are to feel a sense of presence, experience, and accomplishment. They don’t care if they make money from the game. GameFi, based on blockchain construction, has completely changed this ideology. And more and more people also began to understand Web3 through GameFi.

GameFi is an on-chain game built on a blockchain based on a traditional game model. This type of game features all of the player’s assets in cryptocurrency. In particular, some in-game items are in the form of NFT. They are empowering and unique. Even when the game server is down, these assets can still be circulated and traded on the chain. In general, players can earn money in GameFi games, known as play-to-earn. GameFi’s “gold” mode is more competitive than the traditional “gold” mode. In addition, GameFi is considered one of the early manifestations of the meta-universe.

The head app of the chain game plate represented by Axie Infinity has a very experienced performance in 2021. And in terms of single-day game revenue, Axie Infinity and other heads have repeatedly surpassed the internet-leading mobile game King of Glory. This means GameFi has the potential to compete for head-on with traditional games. With a16Z, Coinbase Ventures, Alameda Research, Animoca Brands, and other top VCS like Dragonfly Capital and Binance Labs joining, the GameFi sector has become even hotter. More and more development teams are pouring into the development of chain games. In addition to Ethereum, the maturing of Solana, BSC, OEC, Terra, Avalanche, and Layer2 networks also provide a favorable environment for the growth of GameFi.

Traditional games still have a lot of market potential. And GameFi as another form of the game is also backed by this part of the potential incremental market. “DeFi saw rapid innovation in 2021, and we are likely to see booming interest and innovation in 2022, with SocialFi and GameFi being the main drivers,” said Zhao Changpeng, CEO of Binon, in a commentary published in Fortune India. . This further injects confidence into the GameFi market.

Although the development of GameFi is still strong and has promising potential at the present stage, there are also many problems. GameFi is developed on the chain and is more challenging to create than traditional games. In particular, the development languages of different public chain systems are other, making it difficult for game developers to adapt. Further, lead to poor quality of game development high threshold. Many GameFi games have poorly designed economic models, making it challenging to balance P2E against the game’s fun and ecological sustainability.

In addition, several smart contracts will be deployed in the GameFi sector. A bug in the contract usually results in a loss of assets for players in the game. And decentralized assets are hard to recover. DeFi’s frequent security problems have been a wake-up call for GameFi. For some good GameFi games, there may be market issues. For example, the lack of publicity, diversion, guild cooperation makes the game challenging to operate. These were the problems GameFi faced in its early development.

SeekTiger, which aims to build a decentralized game aggregation platform, is expected to remedy this dilemma further. And become the catalyst and lubricant for developing the GameFi plate, enabling its depth.

For some GameFi development teams within the SeekTiger ecosystem, in addition to receiving early development funding and incubation funding, the ecosystem’s technical teams from significant investment firms will help overcome the technical barriers to the development of linked games and further guarantee the security of contracts in these GameFi applications. At the same time, logical interaction gives additional guidance for some of the game’s development. To make the model of the game itself sound, reliable, and sustainable.

In addition to financial support for game development studios, SeekTiger Ecology will receive comprehensive and multi-dimensional support for game publishing, publicity, distribution, and game guilds based on the four matrices within the ecology. The SeekTiger ecosystem allows game developers to focus more on the game itself without being distracted by subsequent market developments. In addition, any team or individual with an idea can get support from SeekTiger to start their project.

It is understood that the SeekTiger chain game aggregation platform will launch an N+ game support program after the launch. The platform itself provides APIs, technical modules, and wallet support for developers and helps more game development studios get their games onto the platform. The platform will also offer one-stop solutions such as IGO, DEFI liquidity tool, game show download portal, game guild, and community. It will also provide players with gameplay tutorials, wallets, token transfers, NFT transactions, game token Defi investment, guilds, communities, social networking, and other services. SeekTiger will also build on cross-chain technology to integrate high-quality GameFi games continuously from other chains. To enable ecosystem players to access these premium apps directly through the SeekTiger chain game aggregation platform without switching from chain to chain.

SeekTiger is a decentralized metauniverse ecology and advocates the concept of DAO autonomy. The DAO system built by SeekTiger, driven by the SeekTiger DAO community, is one of the more mature DAO systems in the industry.

SeekTiger Ecology uses STI as its governance token. Each IGO launched within the ecosystem will use STI tokens as the main bargaining chip and the primary ticket to enter each game ecosystem. Some mechanical adjustments and event decisions will be voted by the STI community users in the ecosystem. In addition, the player’s P2E in the ecology may also appear as an STI.

STI will adhere to the extreme deflation mechanism in ecology. Both in-game consumption and game mechanic destruction will become the destruction airport scene of STI. And the community will periodically use the profits from the ecosystem to buy back the STI and destroy it. STI will be a mechanistic enablement carrier within ecology. It will further squeeze the bubble out of the game through constant destruction. STI will gradually increase from 1 billion to 10 million.

SeekTiger is a highly daO-obsessed community. And ecological decisions will be voted on by the community. Of course, the DAO system for SeekTiger is more gamified. They can also obtain considerable benefits while participating in governance and community decision-making.

If a user wants to participate in the community’s DAO governance and receive the revenue benefits of this part, they first need to obtain a DAO Medal of Honor. Any member who holds the Medal of Honor will enjoy the platform’s functions or rights such as proposal, voting, governance, pledge, dividend, and so on. According to the rarity, the medal of Honor is currently divided into three types, namely “Satoshi Nakamoto,” “Vitalik Buterin,” and “Zhao Changpeng.”

Users who want to get the DAO Medal of Honor need to open the blind box and get it by compositing. In SEEKTIGER’s world, all characters and items are derived from genesis Digital Tiger. Users who purchase and open the blind box (1 million in total) will receive an “NFT digital tiger” of varying rarity. There are five different scarcity of digital tigers: SSR, SR, S, R, and N, from high to low rarity. SSR tigers: the number of 100, the probability of obtaining 0.01%. SR tigers: 1000 tigers, probability of acquisition 0.1%. S-type tigers: 10,000 tigers, probability 1%. R tigers: 100,000 tigers, 10% chance. Category N: 888900 tigers, 88.89% probability.

SeekTiger’s NFT digital tiger is named after mainstream cryptocurrencies and includes BTC Tiger, ETH Tiger, BNB Tiger, SOL Tiger, ADA Tiger, TRX Tiger, Doge Tiger, and Candy Tiger. The quantity and opening probability of different types of NFT tiger blind boxes are as follows (the price of blind boxes is set at 10USDT+10STI, where 10 USDT is the cost of buying blind boxes and 10STI is the cost of opening blind boxes once).

After purchasing SeekTiger’s digital Tiger blind box and opening it, community users can choose to synthesize the DAO Medal of Honor with it, exchange it and trade it. So when the early blind boxes are sold, NFT digital tigers from the NFT market will be the primary way.

According to the rules, users can redeem the DAO Medal of Honor via NFT Digital Tiger. When the number of non-N digital tigers reaches three or more, they can synthesize DAO digital MEDALS.

Since the total number of different MEDALS is limited, it is easier to synthesize the rare DAO Medal of Honor for early participants. In addition, as the DAO Medal of Honor continues to be synthesized, digital tigers will continue to be destroyed. The more scarce the NFT digital tiger becomes, the more valuable it will become. The DAO will also be able to be traded on the NFT exchange.

While some category N digital tigers cannot be used to synthesize the DAO Medal of Honor, these digital tigers will be exchanged for some cryptographic assets. For example, a random number of TRX, Doge, ecological project token, and governance token STI.

SeekTiger’s first NFT listed on the Binance marketplace and sold out in 1 second! 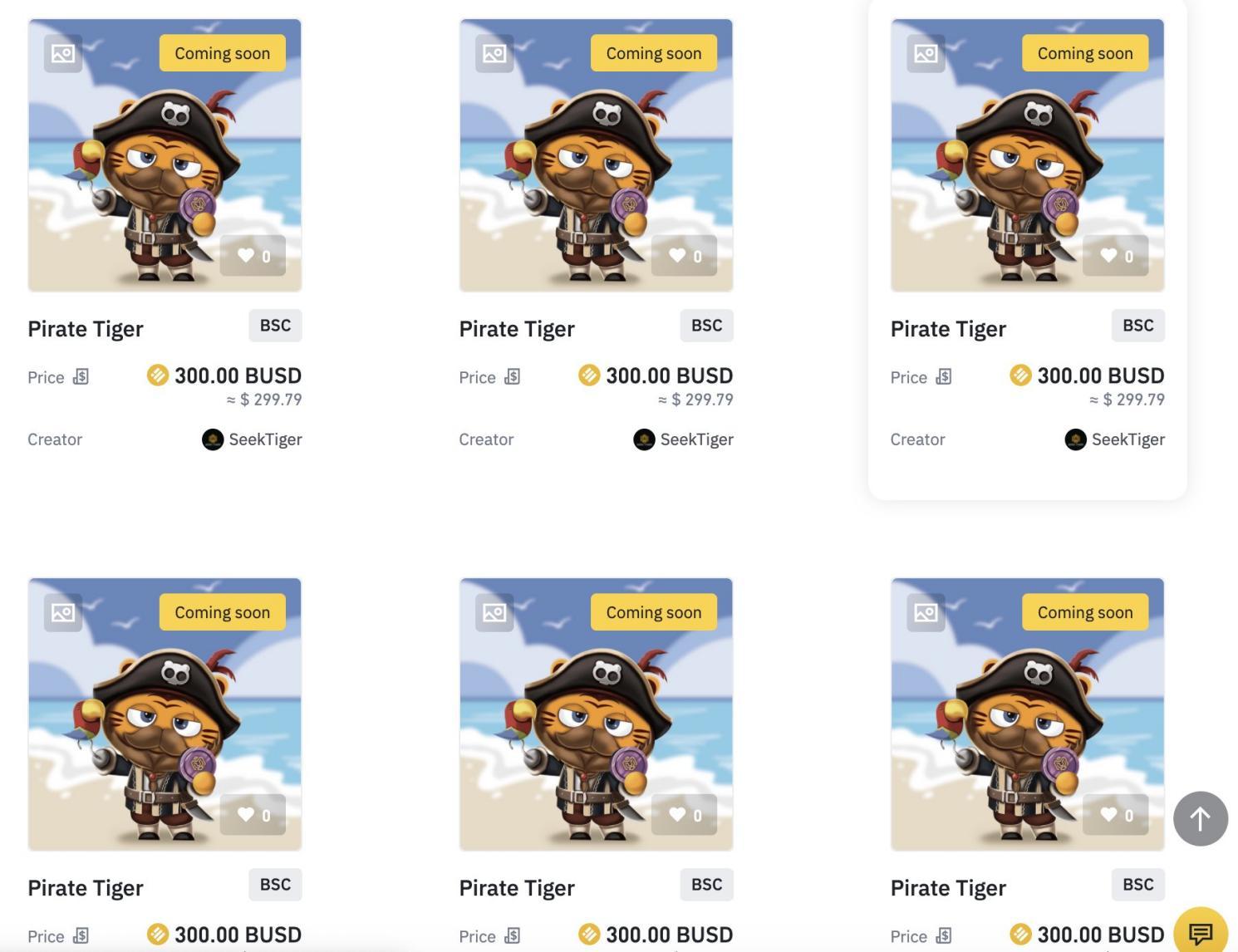 GameFi itself is a sector with great potential. While the plate is in its early stages and has considerable problems, SeekTiger is expected to further the GameFi track in the form of building infrastructure. As a result, most GameFi teams could put their ideas into practice and clarify their problems. The DAO system constructed by SeekTiger is also one of the more mature governance models. And the integration of interest, income, rights, interests, and governance ultimately creates a Web3 feature of the panoramic GameFi aggregation ecology.

Disclosure: This is a sponsored press release. Please do your research before buying any cryptocurrency.