Rollin.IO may look like a contemporary dice site on the outside. With the core mechanics the same, Rollin has gone for the tried and tested formula of Dice. However don’t be fooled as Rollin doesn’t attempt to stick to the conventions laid out by other dice sites as the site has opted for a much more modernised and sleek feel to make playing Dice a seamless and quick experience, which can’t be said for the majority of other dice sites. 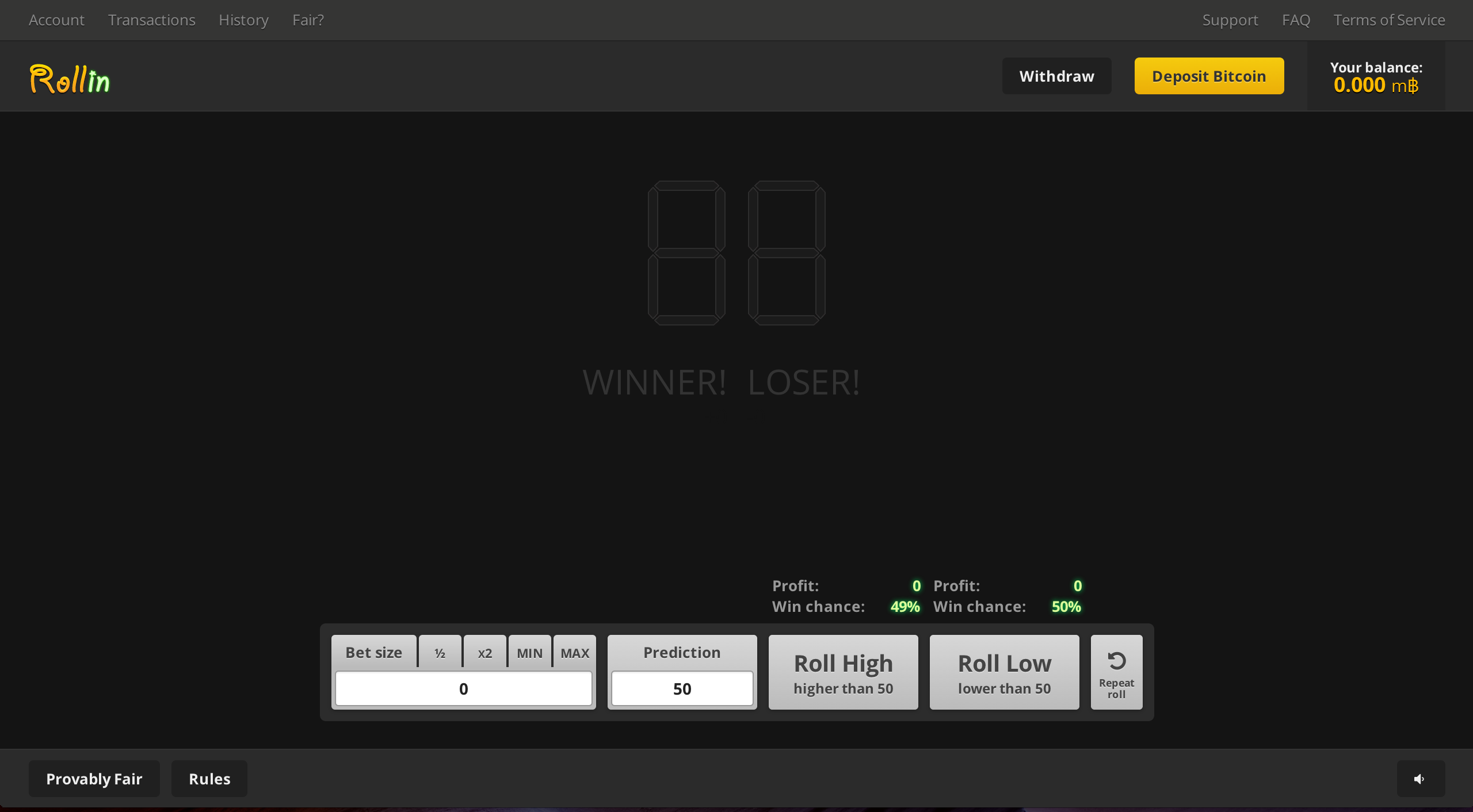 Initially i was greeted by the frontpage of the site. A automatically created account was ready and the fun could begin. The site has integrated a amazing GUI worth of acclaim with a dark and warm colour scheme to make you feel right at home. The design of the site doesn’t take much away from the actual Dice experience as all features have been designed to be straight down to the point.

The core mechanics of the site are extremely functional and contain the tools needed for a complete dice experience. With the controls in easy reach sand the keyboard shortcuts available, playing dice has never been easier. Now you can act on impulse even faster ! The Robot provided by the site is a great way of automation as it encommpases many of the features offered by 3rd party bots on other Dice sites.

Moving swiftly onto the community surrounding the site. Whilst there are Dice sites much superior to Rollin in terms of popularity, no site comes close to the thriving community of Rollin. Once peek in the chatter box, and i was pleasantly surprised. The spam which normally plagues other Dice Sites was not present and the chatter box was used for its original purpose, to chat.

The site has a overall friendly and warm feeling allowing the player to comfortably sink into a fun session of gaming.

The community on the whole is great compared to other dice sites. HOwever there are the odd spammers and hackers but Rollin does take precautionary measures to deal with everyday problems.

One of the most responsive and friendliest customer support staff experienced. Some of the big names in Bitcoin dice may want to take not here.

The site has all the tools needed for a good gambling session. With keyboard shortcuts also included what more could one need ! Site navigation is one area which could be improved but it isnt much of a nuisance when betting.

To conclude, Rollin aims for a unique and community based experience with a unique spin on dice which will leave you coming back for more, much more. With a close knit community willing to help and a customer service that is insistent on seeing smiles all around i had no choice but to be absorbed into the fun and mayhem on the site. The sites technical aspects have also been ranked as being more than satisfactory with the cases of missing or hacked accounts only seen on a rare basis. If there is one qualm i have about the site, it may be the menu. Slightly small and discreet it may be overlooked by many new users. However thats not much of a complaint considering the sites GUI is one of the best in the current Dice scene. A simple change of colour and size for the menu would push it close to perfection but it hardly takes away from the adrenaline and fun experienced even with small amounts being risked.