If you are looking to improve your aim for your favorite competitive FPS title, chances are you’ve done your research about aim trainers, sensitivities, mice, input lag, and all the exciting ways to optimize your setup for that competitive edge.

I’m not going to lie, I’ve been pretty obsessed myself with improving my skill in games like Fortnite, Valorant and Diabotical to name a few. All my questions about improving aim as a motor skill led me to the very beginning: How does our brain learn and improve a motor skill?

Little did I know, there’s ample research out there about the way our brains absorb new information, save it as a memory, and later on reconsolidate that memory which can make it stronger or weaker. Where am I getting this information you may ask?

A John Hopkins Department of Neuroscience study titled: “Motor Skills Are Strengthened through Reconsolidation” You can read the full study, but I’m warning you it’s quite a long read that contains extremely detailed information.

To summarize the study, two groups of participants controlled a mouse cursor with a specially designed mouse that required pinch force to move the cursor. The idea was to present a skill that nobody had prior experience with. The two groups were given equal time to learn the skill in the form of clicking targets on the screen, much like you would do with an aim trainer like Kovaak’s.

While the control group trained with the exact same “pinch sensitivity” every day. One of the groups, had their sensitivity slightly adjusted from one trial to the next, all without them knowing.

“The sensorimotor mapping slightly changed from one trial to the next. Because of this, participants needed to rapidly adjust their motor plan in order to achieve the same task goal”

The study found that the group who had their sensitivity altered actually improved more than the group that trained on the same sensitivity the whole time.

“We found that when participants were unknowingly exposed to an intervention that increased sensorimotor variability after they retrieved a consolidated memory, that their performance on the previously learned skill was strengthened when tested the next day. Participants that practiced the same skill multiple times failed to show a similar increase.

The takeaway from this insanely valuable study is that in order for skills to improve, we have to update our existing knowledge of that skill (which is stored as a memory) with new information aka Reconsolidation.

If you think about applying this information to aim training, if you always train on the same sensitivity your brain doesn’t have to “update” your existing knowledge of how much to move your arm / wrist to hit the targets. Your memory of that skill gets reactivated but without a sufficient mismatch between what you’ve learned and what is required, your brain won’t Reconsolidate or update that skill.

The goal is to force our brain to Reconsolidate our already learned aim training with new information, which in turn will strengthen our original skill.

As I was reading this study, an idea popped into my head…

Since the group whose sensitivity was altered unknowingly during different sessions showed better improvement, I’ve decided to train with dynamic sensitivity that will change every once in awhile without me knowing.

After all, if I’m doing a Kovaak’s scenario and my sensitivity changes mid aim, that will definitely throw my original memory of aim training off guard. I’ve decided to try that style of aiming and let me tell you… after plateauing on my Kovaak’s scores, I’ve hit new high scores after only a day of using this new technique!

Little did I know that a similar method of aim training has already been proposed, and there is even a program called Whisper’s Sensitivity Randomizer which will randomize your DPI in defined intervals. While I personally haven’t tried Whisper’s Sensitivity Randomizer, it accomplishes the same task of forcing you to adapt your aim to a dynamic DPI.

The way I set it up was, I created a macro that changes your mouse DPI settings up and down in various intervals. This will make it so that I can’t predict when the sensitivity change will occur.

You can set up a macro using your mouse software, but if for some reason you are having trouble there are plenty of macro programs out there. In my case, I have the Logitech G Pro Wireless, so I was able to set up a simple macro in G Hub. 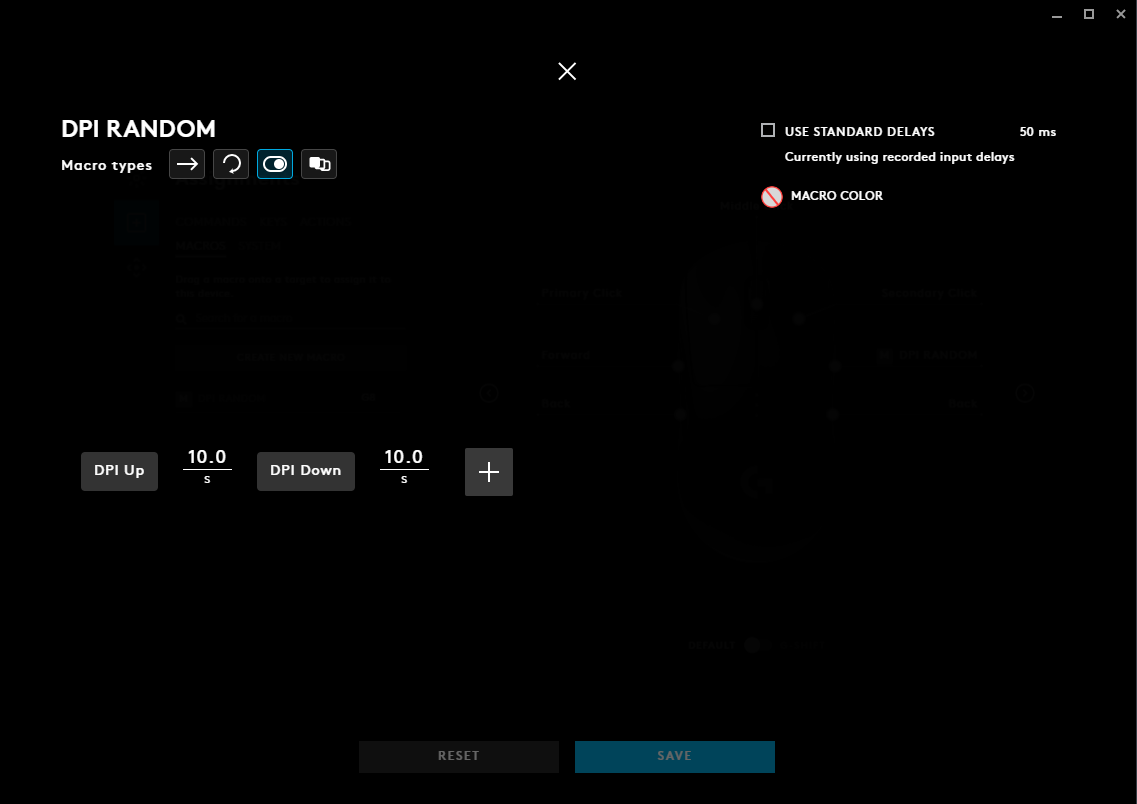 As you can see, this is a continuous macro that I can toggle on or off. When toggled on it will continue to run in a loop until I toggle it off.

In my case, when I toggle the macro, it will instantly set my DPI to the next higher setting, wait 10 seconds, then bring it back down to the original setting, then wait 10 more seconds, rinse and repeat.

Essentially my DPI changes between 2 settings every 10 seconds, in my case it changes between 800 and 1200 DPI. While I do sometimes expect the DPI shift, the constant changing sensitivity really throws me off guard even doing simple click timing scenarios. Obviously, your scores will be lower with this dynamic DPI but I believe this variation is enough to create a mismatch between how you are used to aiming, triggering memory Reconsolidation which ultimately helps improve your skill.

In my case the change between 800 and 1200 DPI is quite extreme, I would suggest sticking with a 100-150 DPI increase which will be hardly noticeable but will still create enough of a disruption to keep your brain on edge.

If you’re still not convinced, check out this write up by Krascsi which detailed his experience with plateaus when it comes to aiming and how changing your sensitivity can help overcome it.

I will leave you with this closing statement from the Hopkins study:

“Our results show that reconsolidation provides a crucial mechanism for the strengthening of an existing motor skill. Increased sensorimotor variability after skill retrieval promotes additional learning changes that are absent following the simple continuation of practice”