Bitcoin has undergone quite a transformation this year. in terms of real life adoption its has seen huge success, riding the enormous wave known as Microsoft and even attracting the likes of Tim Draper to further splash millions of dollars. As gleaming and appealing as this side of Bitcoin looks we can never forget the market which drives the coin. The bitcoin market perhaps the most volatile market comparing to the likes of oil, has disappointed many who may have joined during the peak that was seen at over $1200.

As if the Chineese regulations regarding cryptocurrency were not enough to bring the price down from the pedastel that was $1200, a new threat has reach the horizon. The next signaled BTC price crash is scheduled to occur before the end of the year. Whilst a cheap prrice tag will signal Buy Buy Buy for many, some will see their Bitcoins drop in value attempting to cut their losses and sell. Bitcoin has been given a strong Sell rating by Investing.com with many investors speculating the worst.

The scheduled crash is thought to be linked to the ongoing Ruble crisis as citizens in Russia may be selling their Bitcoins with the worrying economic conditions in the country. The need for fiat cash has always haunted crypto and it seems as if BTC-E has received a influx of sell orders. BTC-E is a Bulgarian based cryptocurrency exchange also popular with most eastern European countries favoring it, including Russia. Technical analysis of Bitcoin charts previously hinted at a trend reversal as the double bottom which was hit prompted many to believe a rally was imminent. 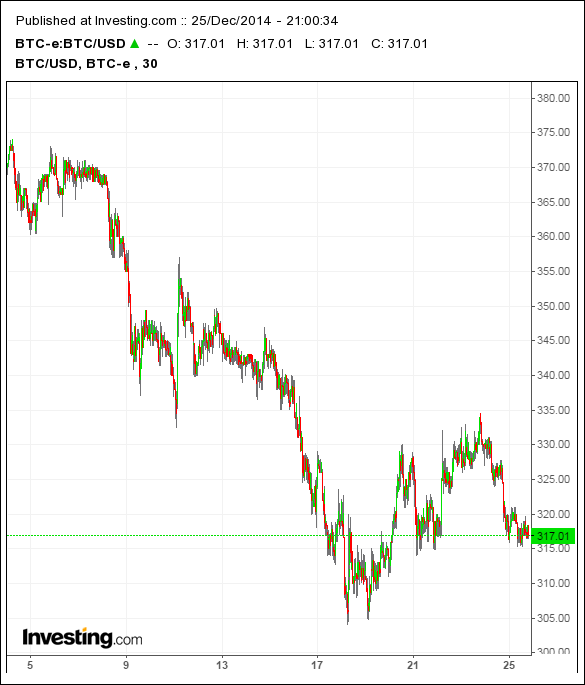 However the graphs recently show a whole different story. The market has been deemed Bullish by the majority of users. Whilst $300 has been a strong support level for Bitcoin over the past few months the coin has remained stable not rising infact decreasing on many occasions. Graph analysis brings to light how the prices have dropped over the past week in paticular. $320 seems to be the upper wall restricting growth in the markets. Resistance was particularly strong from the bullish markets at present a small increase in price was instantly reverted pushing the price to new lows of $316. This occurred twice with the second blow sending the price further to $315.

The analysts never stop analysis and speculators never stop speculating but the incoming threat of a huge price drop is looming. Ask anyone where the price will go and expect to receive any one of the two answers, either to the moon or that the coin will crash and burn. These 2 perceptions have long been rooted into the Bitcoin community but the ongoing market activity has seemingly rattled most of the community. With the Buy to Sell ratio suggesting the price has a long way down. However strong hands will not have given up as looking at the bigger picture most traders are still in positives. With the worst of the storm seemingly gone will a rally ensue after this last drop ? If you liked this article follow us on twitter @themerklenews and don’t forget to subscribe to our newsletter.