DARFChain offers to crypto funds and crypto investors public verifiable smart escrow system using “proof of accounting” (“PoAcc”) trusted oracles network  and “DARFBoard” as an instrument to  to control and audit of spends and execution of ICO/DAO projects.

Regarding the last month report of the data provider Novum Insights, in period from January through September 2017, ICOs generated $2.2 billion, more than three times the amount invested in similar startups by traditional venture capital firms. Cryptocurrency exchanges – where virtual currencies are bought, sold and stored – have become magnets for fraud and deception. More than 980,000 bitcoins – the most popular virtual currency – have been stolen since 2011. Today they would be worth about $5 billion.

But the recent flurry of ICOs raising millions of dollars has attracted some dubious business propositions and outright scams, as well as speculators looking to trade the coins for swift gains. Authorities in the United States, Switzerland, China, Singapore and other nations have begun scrutinising the sector closely for potentially tougher regulation.

Are you sure that coins your investing coins in ICO’s works properly?

Just three months ago a tech project called Tezos raised $232 million online in a wildly successful “initial coin offering,” in which new digital currency is parcelled out to buyers. It wзas the most money ever raised from the public in the white-hot cryptocurrency sector. Tezos aims to be a blockchain that’s more reliable than the ones behind Bitcoin and Ether. Several entrepreneurs and investors in the blockchain industry said the Tezos technology has potential because it would be easier to upgrade and may be more secure than other blockchains.

But the venture is now in danger of falling apart because of a battle for control between founders, Hundreds of millions of dollars are at stake: The Tezos digital coins, called “Tezzies,” are already priced at a hefty premium in futures trading even though they don’t yet exist. The launching of the Tezos network, which will trigger the coins’ release, has been delayed. This has resulted in costly delays in developing and launching the Tezos network and new currency. Until the network launches – and no date is set – contributors to the fundraiser will receive nothing. Under the terms of the Tezos coin offering, there’s no guarantee participants will ever receive a single Tez. SEC will demand Tezos’ founders refund  $232 mln investors’ money that was raised in July. However, Tezos have mushroomed to more than $500 million in value because the contributions were made in two cryptocurrencies – 65703 bitcoin and 361122 ether.

Vitalik Buterin, founder of Ethereum, in most of his public speeches stresses how important it is to meticulously measure and account contribution of the development team in each and every DAO built by crowd-funders. We all need to have the decentralised platform for data exchange and a planetary-scale software infrastructure. Security is very important while dealing with smart contracts which handle tons of money.

Stanislav Taktaev, CEO and founder of DARFChain, regards: “We predicted in August, that the audit absence is  putting every such project at a high-scale risk. These situations  will be repeated more and more in cryptoworld  without new instruments to  ensure and control. If crypto-funds and crypto-investors take and use the transparent audit system like DARFChain offered, they can fully control all his deals due to the smart contracts. Our DARFBoard audit system assist an enterprise to do business in new conditions of the decentralised economy, to create for them an ecosystem based on distributed ledgers, make new schemes of partnership and business available, relying on the advantages provided by the blockchain”. 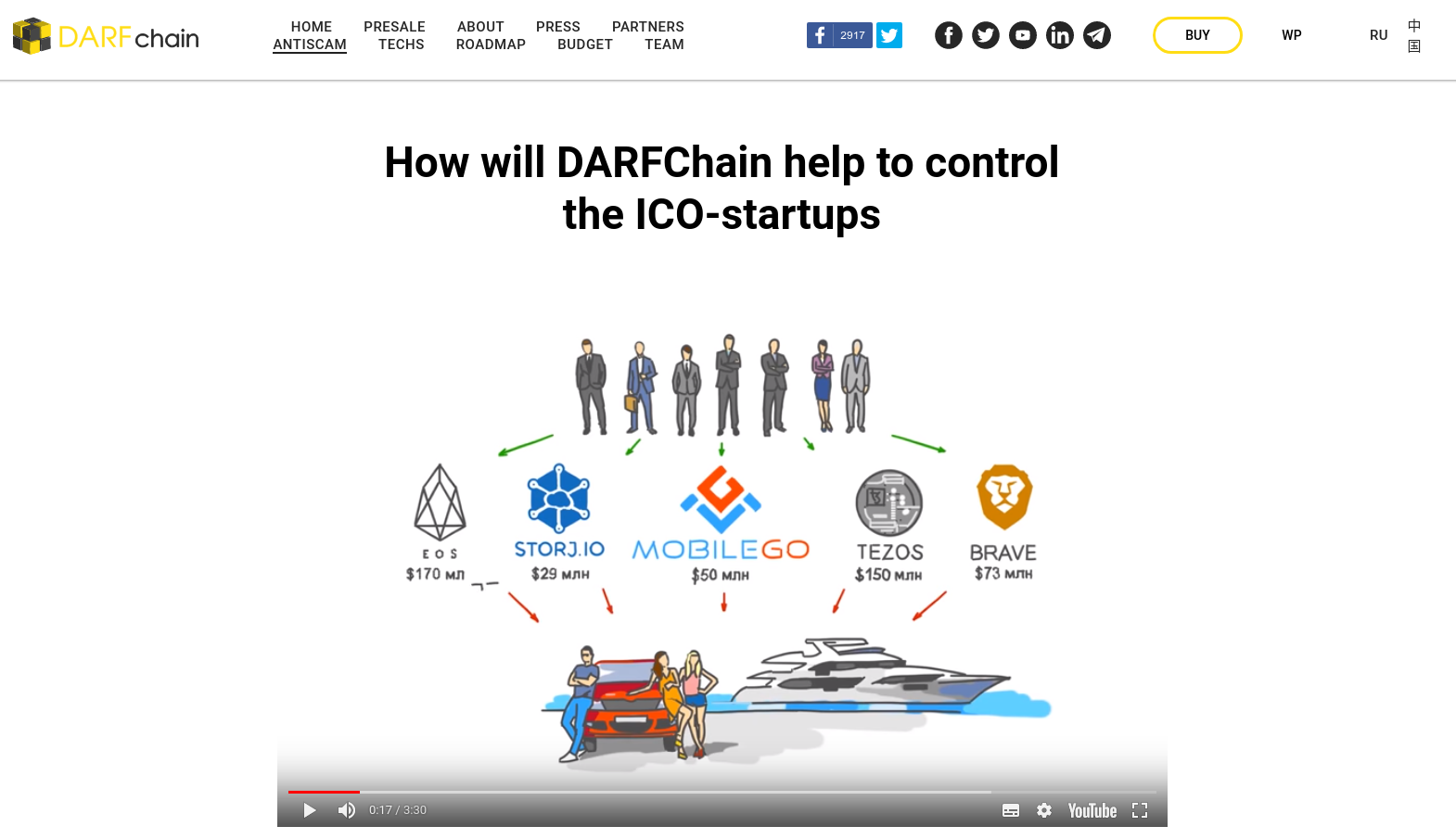 What did we do?

The DARFchain initiative is pleased to announce the successful launch of its integrated smart escrow proof of accounting solution for a distributed ERP system involving smart contracts that uses Odoo, BigchainDB and Ethereum technology stack. Tokenonomy in the global world needs for a decentralised, permanent, safety and public verifiable interplanetary smart escrow by building “proof of accounting” (“PoAcc”) trusted oracles network. In “PoAcc” consensus  every project’s token value verified thrice: 1. by unmutable accounting, when every document’s hashes writes in to smart-contract; 2. by all-side technical audit of projects execution, using balances, balanced scorecards, burndown charts and other instruments; 3. by crowd-audit, when community of auditors verified digits by hands.

Konstantin Bakulev, CBDO and founder of DARFChain, set the mission’s point: “DARFChain helping to solve the problem of  transparency of the token sale custody chain and distribution of ICO and pre-ICO proceeds, goals to establish global best-practices and standards for Tokenomy. Our team is deeply committed to the idea of new transparental world  of Tokenomy, and today we are proud to confirm our leading position in crowd accounting, resource and finance management. Now we are creating an ecosystem where all participants get benefits from their data exchange. We work now on a decentralized platform for data exchange and a planetary-scale software infrastructure“.

We suggest to join all investors and stakeholders to interplanet ecosystem up to ICO Governance and create the decentralized global organization, whose mission is the establishment of a protocol-based global community that performs a self-regulatory function for ICOs in decentralized capital markets. The foundation and these standard protocols are part of a Global Public Utility and industry self-regulatory function that is needed to align stakeholders and to improve the volume and flow of capital incentives for ICOs in term security  and legal liability. So, DARFChain offers the strategic decision for crypto-investors and crypto-founds that allows to audit in real time how work investing resources.

Right now DARFChain develops the free-scalable version of ERP on IPFS (“Interplanetary File System”) and work on “DARFBoard” – control and audit instrument of ICO projects for crowd investors. An audit play a key role in assisting organisations in understanding and meeting their data protection obligations. The audit provides an assessment of whether your organisation is following good data protection practice, gives the effective policies and procedures in place and includes recommendations on how to improve.

Early, at the beginning of September DARFChain’s report about preponderance of  “Sci-Fi” (aka “Cosmic”) ICOs become a base to article in Forbes by Roger Atkinson: https://www.forbes.com/sites/rogeraitken/2017/09/05/sci-fi-crypto-icos-versus-real-business-icos-breaking-down-the-hype/

ICOs is a way for technology projects to raise money online to finance the development of new, open-source computer networks that aren’t necessarily looking to make a profit. It provides to  businesses a way to make record-keeping simpler and cheaper. Contributors receive new digital coins, or tokens, which they typically need to “pay” to access the new networks.

DARFchain (Distributed Accounting, Resources and Financials on blockchain) is an open-source blockchain based Enterprise Resource Planning solution operating on BigchainDB, Ethereum and Waves platforms. The startup was founded in May 2017 by Konstantin Bakulev and Stanislav Taktaev. DARFchain has its headquarters in Moscow.

This is a sponsored press release and does not necessarily reflect the opinions or views held by any employees of The Merkle. This is not investment, trading, or gambling advice. Always conduct your own independent research.